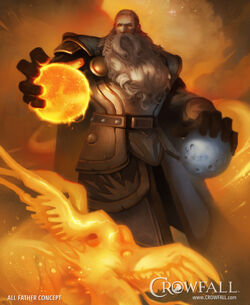 5 For He shall be known as the Oldest of the Gods, All Father of the Heavens and He Who Sang the Universe Into Being.
6 These titles and more shall be granted unto him, for He is King by right, and ye shall call him
7 Valkyn the Ancient, Creator of the All, and He Who Sits Upon The Dragon Throne.

8 The Dragon Throne is His and His alone, though it be ill-named, for surely it is more Throne than Dragon.
9 In the Time before Time, the Great Lord came upon the Wyrm Eternal,
10 and lo, did it anger him.
11 He ripped the great beast asunder, turning one into two
12 and He did name them both.
13 The one he called Yaemir, King of Snakes and the other Lyessa, Queen of Wyrms.

14 And yet his work was not yet done.
15 He bent the great tail of Lyessa, twisting it unto itself til the arch of her spine formed the Heavens above
16 and thus was the Sky given substance, and form.
17 The stars appeared in the glinting on her scales and her breath became the eastern wind.
18 He stole Yaemir’s fire, and hung it in the western Sky.
19 He called this work the Sun.
20 He stole Lyessa’s unborn, placing her egg at the eastern edge of Heaven.
21 And he called this work the Moon.
22 The King of Snakes dared not move, for fear his wife would be broken.
23 The Queen of Wyrms dared not move, lest the Sky collapse and her children perish.

24 His work finally ended, Valkon did sit on Yaemir’s back, making the creature His living throne.
25 And there He sat, for time immemorial
26 until the death of Gaea, and the Hunger. 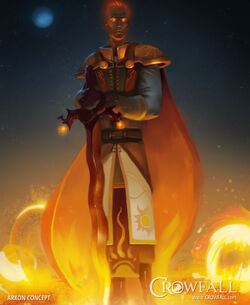 22 And so the High Prince Arkon accepted as his birthright the Sun, which was stolen by his Father from Yaemir the serpent king. 23 His brother Kane was furious that he should be denied the gift of fire, for the great smith loved not his barren realm the Moon.

24 Arkon took the rising sun as his symbol, adorning it on his golden plate and tabard.
25 He took Gaea for his wife at his Father’s insistence
26 and she bore for him the Race of Men. The children of Arkon and Gaea did multiply beneath the Arch and the flickering light of civilization took root in the shadow of Lyessa.
27 The last of their issue was the Race of Elken
28 and Prince D’Orion the Sky Hunter the first of his kind.

29 For many years there was peace and the union was fruitful
30 but the marriage of Justice and Life was one of convenience, not Love
31 and thus was it poisoned at the root. 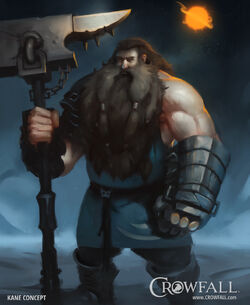 2 and so did Arkon swear to bring his brother to Justice
3 but his heart sought vengeance, not peace.
4 With bitterness and anger, he took up the greatsword Retribution and swore that this crime would not go unanswered.
5 The High Prince cried across the Heavens to his twin,
6 “As thou has shamed me, so shall ye be shamed!”
7 and he challenged Prince Kane to a duel by light of first morning.

8 The younger prince Kane did weep, for the loss of his brother was almost as great as the loss of Life
9 and the shame fell heavy on his great shoulders.
10 On break of dawn, Kane did come to the place of his brother's choosing
11 but he brought not the greathammer Sorrow with him.

12 The first bird of morning did witness his arrival, and said unto him
13 “why do you come thus unarmed to the house of your Father?”
14 and Kane replied, “I cannot undo that which I have done. I wish to live no longer.”

15 Yet in that time and place the Sky Hunter laid in wait, angry over the death of his mother.
16 The Hunter fell upon his uncle, thinking to take him unawares.
17 Prince Kane lashed out in surprise, felling the Sky Hunter with a single blow.

18 when Arkon arrived and saw what had transpired he said to his brother,
19 “My son has taken my stead, challenging you in the time and place my choosing.
20 You have proven your innocence in trial by combat. Justice will never be mine.”
21 and Arkon gathered up the body of his son and left that place.
22 His yearning for vengeance was not sated.

Retrieved from "https://crowfall.fandom.com/wiki/War_of_the_Gods?oldid=4313"
Community content is available under CC-BY-SA unless otherwise noted.