The Crowfall universe is comprised of a plethora of separate worlds, which are then divided into bands. These bands include the Eternal Kingdoms, God's Reach, Infected, Campaign Worlds, and the Dregs. These worlds become more dangerous the closer they are to the epicenter of the Hunger, but the most desirable resources are located in the most dangerous worlds.

Travel between these worlds is possible via Runegates. 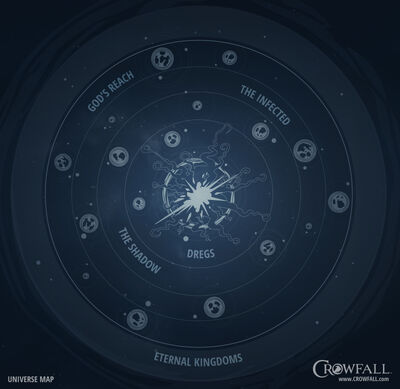 These worlds are completely player-owned and player-managed. The furthest from the Hunger, the Eternal Kingdoms are safe from the worlds-consuming virus that is slowly destroying the universe. These worlds are customizable by the Monarch (the world owner); PvP can be turned on or off, the Kingdom can be set to public or private, and the Monarch can assign their friends ranks that allow them to place parcels of land and buildings.

Proving grounds for fresh vessels, the God's Reach worlds are⁠ — as might be inferred from their name — within the reach of the gods. That means these worlds are relatively safe from the influences of the Hunger, and so aren't destroyed in the same way as the Campaign Worlds. There is no PvP available here, and all players enter into the world on the same faction. There are no outposts, forts, or keeps to claim, though there are war tribes to fight.

The Infected worlds are just at the edge of what little protection the gods can provide against the Hunger. They are meant to act as perpetual training grounds and permanent staging areas between Campaigns. Although PvP is available in these worlds, inventory cannot be looted (though equipment still takes a decay hit upon death). There are outposts, forts, and keeps that can be sieged and claimed. The score doesn't accrue over time, but rather acts as a snapshot of which faction currently has the most resources under their control. Infected worlds, like God's Reach, are not destroyed. While there are some resources in these worlds, the quality is limited, especially compared to the Campaign Worlds.

These worlds are fully outside the shield of the gods, and are each slowly consumed by the Hunger. Higher in risk level than the Infected worlds, Crows that travel to the Campaigns will be subject to PvP and have their inventory available for looting if they're killed. These worlds, however, have higher value resources available for harvesting. Various outposts, forts, and keeps can be sieged and claimed, and the score is cumulative, culminating in one team winning when the world is destroyed at the end of winter. Additionally, these worlds have world banks, meaning there are limits to the items that can be taken into and brought out of the world.