Stoneborns in Crowfall belong to the playable Races, which were introduced alongside with the newly added Classes in the massive reveal on May 18th, 2017. The old Archetypes, which were presented earlier, became completely obsolete.

Eldest of the races, the Stoneborn are technically not mortal beings of flesh and bone. They are enchanted creatures shaped of raw earth and living tree, with skin of living stone and beards of twisted vines and earthen roots.

The Stoneborn do not take wives and never reproduce. They were created at the beginning of time to service our worlds, to tend the fires that burn deep beneath the surface of our worlds. They call this effort “The Great Work”. It is said that they take orders only from Kronos, Lord of Time, and used their mighty hammers to carve out the tunnels and channels through which magma, the living blood of Gaea, might flow. This blood has been cooling since Gaea’s death, the flow slowing as it cools. The Stoneborn work tirelessly to try and keep it warm and moving, but there is little they can do to help.

The elder races – the Elves, the Fey – call them Stoneborn, but the younger races call them Dwarves. This name is odd, for they are massive creatures, almost as tall as men and easily twice as wide. They are dwarvish only when compared to those of Giant blood.

As they were shaped, not born, there are a limited number of Stoneborn in existence. Whenever a Stoneborn warrior dies, that is one less servant to tend to the fires that burn in the belly of our worlds. [1] 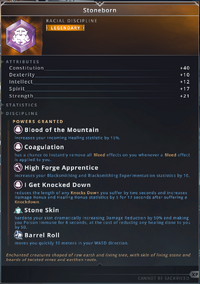