Netharis in Crowfall belong to the playable Races, which were introduced alongside with the newly added Classes in the massive reveal on May 18th, 2017. The old Archetypes, which were presented earlier, became completely obsolete.

To the common eye, most Nethari appear no different than other humans. Skin tone, eye and hair color are generally not indicative, as these vary with almost the same degree of pigmentation as seen in other humans. The few elements that mark someone as a member of the Nethari – short hair, and a series of fiery tattoos emboldened on the shoulders, arms and face – are cosmetic in nature, not given at birth.

Yet the Nethari claim to be a separate race from man. By written tradition, it is said that Arkon, Lord of the Sun, choose one particular tribe of humans to rule all the others and, as proof of this, ensorcelled the blood of his chosen people with fiery breath stolen from Lyessa the Mother Dragon. This blood, passed down through many generations, is said to be the reason why Nethari tattoos burn with an eerie incandescence.

Scholars of other races dispute this tradition, claiming that the effect comes not from their blood, but instead from the ink that is used in the application of these marks. Nethari take great offense at this suggestion, and wars have been fought over the insinuation that their blood is no different than that of “common men.”[1] 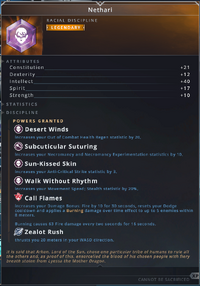