Minotaurs in Crowfall belong to the playable Races, which were introduced alongside with the newly added Classes in the massive reveal on May 18th, 2017. The old Archetypes, which were presented earlier, became completely obsolete.

By legend, the Minotaur was created by the Prince Malekai, Lord of Shadows, in defiance of Prince D'Orion the Sky Hunter. As with all great creation stories, however, this is unproven and highly debated. What is known about this race of bull-headed savages is that they first appeared in written history as slaves to noble Elven families in the ancient High-Elf city of Aelfmuir. Used as protectors, fighters and beasts of burden, the Minotaurs broke free of their masters in the Celestial War and have lived in and around the outer fringes of civilized society ever since.

While many believe that Minotaurs are incapable of sentient thought, this is not actually the case; however, they are unable to speak the Common tongue and speak in a guttural language that is understood only to others of their kind. In demeanor, Minotaurs are quick to anger, slow to forgive and seem incapable of showing subtle emotions like joy, mercy or remorse. Ferocious and bloodthirsty, they make up some of history’s most savage pitfighters and brutal warlords. [1] 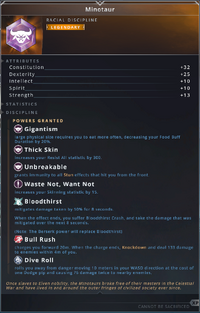 Note: Out of date information!

Concept: Minotaur customization
This article is a stub. You can help Crowfall Wiki by expanding it.