Faes or Fey in Crowfall belong to the playable Races, which were introduced alongside with the newly added Classes in the massive reveal on May 18th, 2017. The old Archetypes, which were presented earlier, became completely obsolete.

In the time before of time, the Fae were playful and joyful folk who lived in the deep seclusion of the woods of Cybele, the Virgin Goddess. For centuries, they seemed unconcerned with the politics of life beyond the woods, content to keep to their own and avoid treating with outsiders.

The Fae were once ruled by a council of kings and queens, named for the seasons: Spring, Summer, Fall and Winter. This age, according to the bards, is referred to as the Season of the Seily Court. It came to a swift and violent end when Oberyn, Prince of Gloaming, fell in love with the Lady Cybele, the Virgin Goddess. Forsaking his queen and family, Oberyn declared himself High King in an attempt to prove himself worthy of Cybele’s love.

His wife Titania, driven mad with jealous rage, plied her husband and his men with an over-abundance of wine and slit their throats while they slumbered. This began the Season of the Unseily Court, under the rule of High Queen Titania. It also explains the Fae tradition of killing male children at birth. The few males that survive do so outside the bounds of Cybele’s forest, raised as street urchins, foundlings or slaves.[1] 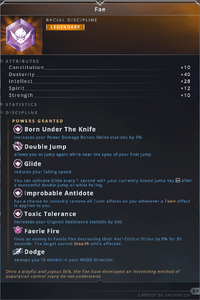 Note: This is out of date