Unlike campaign worlds, Eternal Kingdoms are permanent -- and they are completely managed and owned by the players. Players monarchs can divide up their domains into provinces, and grant those lands to other players as they see fit.

Kingdoms are the seat of a player's power and base of operations. Kingdoms can be massive -- with mountains and rivers, monster camps and ancient ruins. But they are also devoid of resources: Stone, Metal and Wood. For these, players have to go off-world and brace the Campaigns of the Dying Worlds.

Each player account is automatically granted an Eternal Kingdom, the first time they log into the game. This Kingdom will be shared by all characters on that account. As the owners, players are the Monarch of that World. That means they get to set many of the rules that govern that World and control the land and the structures within it.

The map for each Kingdom World is divided up into grid squares called “parcels”. Each parcel makes up a single “grid square” and is roughly equivalent to 1 square acre of virtual land.

Each Kingdom starts with a grid of 3x3 parcels (9 total). This land is reserved for the Monarch, and cannot be granted to other players. It is typically used for this World’s capital city and marketplace. 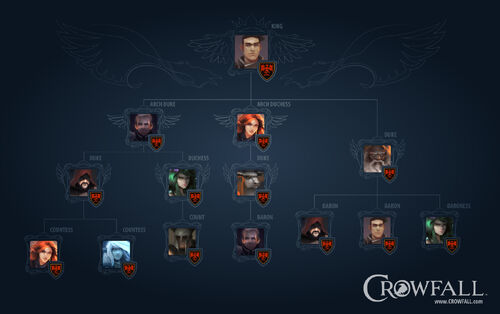 Monarchs have complete control over their Kingdom. They can: partition off sub-sections of land (adjacent parcels) and grant these to other players as “rental properties.” These players become Vassals of the Kingdom.

Monarchs can charge property taxes for the use of land. They can charge import and export tariffs for moving goods into and out of their Kingdoms. They can set administration rights on the world (such as PvP rules, and which player(s) can log into the World.)

Within a province, monarchs must always keep 1 parcel for themselves (to represent their seat of power.)

Of the remaining parcels, no more than 50% can be granted to a single player. This means that the number of Vassals that a monarch can have, for any given province, will be between 0 and (N-1), with N being the number of parcels in that province.

A vassal is granted a “province,” meaning “a contiguous area of the Land that I control, as a tenant.”

A province is a set of some number of contiguous parcels. The smallest province is 1 parcel. The largest province is the entire World (of which the Monarch is the owner.) The owner of a province can grant (sublet) up to 50% of his or her domain to another player.

These relationships can be nested. For example, if a Monarch has 100 parcels of land, he or she could grant 20 parcels to one player, 30 parcels to another, and keep 50 for themselves.

The Monarch still “owns” all 100 parcels. The sub-granted lands are basically rented out to the other players, like tenants.

The player with 20 granted parcels can then effectively sub-sublet 19 of those 20 parcels to other players, creating a “Fealty Tree”, or a nested hierarchy of player ownership. A single parcel could be owned by the Monarch, granted to a Duchess, who then sub-grants it to a Baron, who in turn leases it out to a Noble.

Each of these players is considered to a be an “owner” in the Fealty Tree for this parcel.

Every vassal in the Fealty Tree is given access to use ALL the (player-run) services (including the passive training NPCs) located on that World, as well as the ability to collect taxes and to change the administration rights in their province. They are also granted a noble title on that World.

Retrieved from "https://crowfall.fandom.com/wiki/Eternal_Kingdoms?oldid=4226"
Community content is available under CC-BY-SA unless otherwise noted.