The Druid is one of the playable classes in Crowfall. The Druid underwent a lot of changes and now belongs to the many available classes in the game, after the concept of archetypes was abandoned by the Developers. With the massive reveal on May 18th, 2017, the Druid now can be played by several races, too. 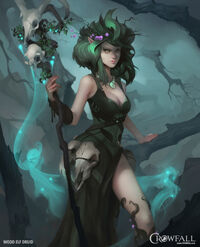 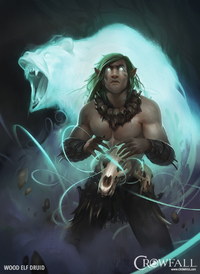 In life, the order of the Druids were the followers of Gaea, the Earth Mother. A cult of forest dwellers, the religious took root first with the Wood Elves before spreading to the Fey and, rarely, took hold with those who share both Human and Wood-Elf blood. In the time since Gaea’s death, the Druidic cult has largely disbanded. Druids who choose to fight for the gods in the afterlife do so for their own reasons. Some seek vengeance, others are on a quest to find purpose. Many feel a doomed sense of loyalty to a goddess who is no more.

I can still hear the echo of her final breath. Faint, nearly forgotten.

These lands are broken, like her body. You see? They are the same.

A candle in darkness. Once lit, now extinguished. The wick glows dimly, but no hope of light. A thin line of curling smoke marks her last breath.

This is the Hunger, my child. The Hunger is not a thing. It is no “thing” at all.

What means 'darkness' ? Where once, there was light.

What is 'cold' ? Where once, there was heat.

What is the Hunger ? Where once, there was Life.

Can you hear it? The silence? Once, our World had a pulse. Her blood, that molten rock which once flowed so strongly through her veins… it slows, now, and thickens.

My brothers, sisters and I cannot heal your World. Dead stays dead. Unlife is not Life. This is the way.

I weep, but it matters not. When the last warmth is gone, I will weep no more.