The Confessor is one of the playable classes in Crowfall. The Confessor underwent a lot of changes and now belongs to the many available classes in the game, after the concept of archetypes was abandoned by the Developers. With the massive reveal on May 18th, 2017, the Confessor now can be played by several races, too. 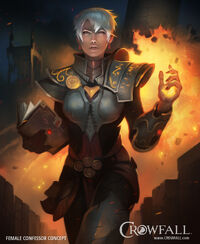 Concept of a female Nethari Confessor 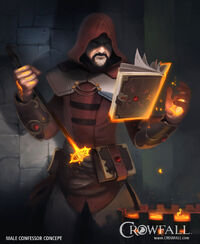 Concept of a male Nethari Confessor

Think of me as your confidant. No, as your brother. That is the depth of my love for you.

What do you know of the Hunger, Brother?

Do you believe that every World must die, as a tree rots from age and decay? That the Hunger is dark sorcery – the work of greedy conjurers and demon worshippers?

The Hunger is the embodiment of ordinary sin.

Ordinary sin that corrupts the heart of ordinary men… Men no different than you. Men who live in darkness, and hide from Mother Church.

This is my service and my penance: seek out the shadow, expose it to the flame of truth, and drag the sinful back into the Light.

Will you not admit your failings? Your village is aflame. Your family is gone. Your lies benefit no one.

I can make the pain stop.

Tell me of your Sins.

Before The Hunger[edit | edit source]

Before the arrival of the Hunger, the race of men had one great organized religion: Mother Church, the Disciples of the Holy Flame. The Church is primarily dedicated to the worship of Arkon, the Dawnbringer, First Son of the All Father and the heir to the Dragon Throne.

As the name would imply, the devotion also centers around the worship of fire as the central element -- the Sun being the ultimate embodiment of warmth, sustenance and life.

The Church holds that fire is a gift of the All Father – wrested from the belly of Yaemir the Great Serpent (literally, the All Father reached down Yaemir’s throat and stole his fiery breath) and hung it in the sky as a gift for infant son, Arkon. Arkon and Gaea, in turn, gave it to their children (the race of man) as their birthright.

The Church recognizes the divinity of all the All Father’s children, but place Arkon first among them. The symbol of the Church is the rising sun.

When the Hunger appeared, the Church was thrown into chaos. Scholars and religious leaders fell into vicious (and arguably pointless) debates about the cause: Was it natural? Were the Gods angry? Was this punishment for some great wrong?

The highest priests of the Church, who for centuries had claimed to have direct communication with the Gods, prayed for enlightenment. They were dismayed to find that they could no longer hear the voice of the All Father at all.

As the Hunger spread from one world to the next, everything went from bad to worse. The Church, once thought timeless and immortal, splintered in two: The Confessors, arcane scholars who believed the Hunger to be physical embodiment of the sins of man, and the Templars, a military order of holy knights.

Fire can be a symbol of warmth, life and rebirth.

It can also be used as a tool. When a body is wounded, the scholars argue, the bad flesh must be cut away to save the good. Fire can cauterize the wound, keep the disease from spreading – if cleansed fast enough, and deep enough, the body might be saved.

If the Hunger is punishment for the collective sins of all mankind, then the only hope is to exorcise that corruption, to remove all that which is offensive in the eyes of the Gods.

Fire became more than a symbol.

…it became a Shield. Surely, any World touched by the Hunger is marked – for if that World were innocent, would it not have been spared by the Gods?

…it became a Sword. Should we not punish the wicked, to evidence our remorse and beg forgiveness of the Gods? The Gods are merciful! If we truly repent, surely the Hunger will recede.

Mother Church once stood proudly, a solitary candle in cold, dark room. Bold, illuminating, noble… a bright and shining symbol of hope for all.

But now her light has faltered, leaving only a thin trail of smoke and a quickly fading ember… and long, cold shadows on the walls.

The title of Confessor is officially sanctioned for use only by the Church of the Sun, but used colloquially to include the practitioners of fire magic across all cultures. Confessors spend their lives dedicated to the Art of Pyromancy, the memorization and recitation of ancient words of power that can be called upon to ignite wood, melt stone, consume flesh or char bone. Many claim these words to be divine in nature, though the stated source differs from one culture to the next: prayers to Prince Arkon the Sun God, incantations to the Lyessa, Mother of Wyrms, or perhaps even the divine language of the All-Father himself.

The Confessor can equip the following runes: