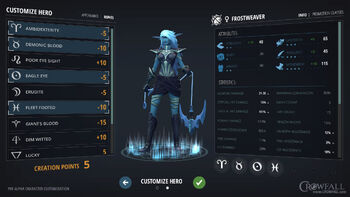 Players start the Character Creation with a set number of creation points. Then, they pick an “Archetype” class –a race/class combo – from an initial set of options. Each Archetype has a point cost. That cost varies depending on the base attributes and skills of that Archetype. For example, Centaurs have a higher starting Strength, so they are more expensive. This means they have less (fewer) points left over to spend on Advantages and Disadvantages.

For example: “Eagle Eye” might give an increase to accuracy with ranged weapons. “Dim-witted” might lower Intellect, but give points that players can spend to further increase your Strength.

Advantages cost points, disadvantages give additional points to spend. There is a limit to the number of Advantages and Disadvantages players can start with.

Players will have the ability to customize their character (hair styles, color and face) in Character Creation. Further customization can be done in-game, by collecting equipment.

Characters are assigned skills based on their archetype, advantages, promotion class and disciplines. If a player changes disciplines, they may lose the ability to use certain skills.

Retrieved from "https://crowfall.fandom.com/wiki/Character_creation?oldid=4315"
Community content is available under CC-BY-SA unless otherwise noted.