The beginning of each Campaign is like the first round of "Civilization": players are dropped blind and naked into a harsh environment filled with deadly monsters, haunted ruins, abandoned quarries... and the most dangerous predator of all, other players. Craft weapons, scavenge armor, secure a stronghold, forge alliances and conquer the World.

Campaign Worlds are procedurally generated -- meaning that a technology library is used to automate the process of creating each World’s map. Mountains, forests, rivers, castle ruins, abandoned villages – each World is different, which means the game of territorial conquest will be different in every Campaign. Campaign's will have different rulesets.

The worlds are also made of voxels (like Minecraft, only much smaller) – which means the entire world is destructible.

Add a photo to this gallery

Each campaign world exists for a set duration – typically 1 to 3 months -- or until some "win condition" is met. During that time, the World will cycle through a single in-game year: Spring, Summer, Fall, and Winter. Through the course of the Campaign, the Worlds grow more sinister and deadly as the land is consumed by the Hunger – an unstoppable legion of the undead.

At the end of Winter, the Campaign ends. A victor is declared, the map is wiped and the World goes offline forever. The players – the Crows – then fly back to their Home Worlds, to either count their spoils or lick their wounds before they choose a new Campaign and fight again.

Phase 1 is Spring. The Campaign map is hidden by fog of war. Players are dropped (typically naked) into an unknown, deadly environment. This world is filled with the ruins of ancient castles, abandoned mines and haunted villages – which players have to explore to scavenge for weapons, tools and the resources to start building fortifications.

Phase 2 is Summer. The Hunger starts to infect the creatures. Resources become scarce. The player's team claims an abandoned quarry and must fight to keep it. They use the stone to build an ancient keep, to use it as a staging area to attack your neighbors.

Phase 3 is Fall. The creatures become more deadly as the Hunger takes hold. Resources are heavily contested and transporting them is fraught with peril. The player's guild frantically builds a wall around their city, as the nature of conflict shifts from smaller skirmishes to siege warfare.

Phase 4 is Winter. The environment is brutal. Warmth is hard to come by. Kingdoms grows in strength; player neighbors falter and the player demands that they swear fealty or face complete loss of the Campaign. Instead, a handful of smaller kingdoms choose to band together against the player.

Phase 5 is Victory and Defeat. The World is destroyed in a cataclysmic event as the Campaign comes to an end. The player's Kingdom emerges victorious, and they return to the Eternal Kingdoms to enjoy the spoils of war. Their adversaries head home, too -- to lick their wounds. 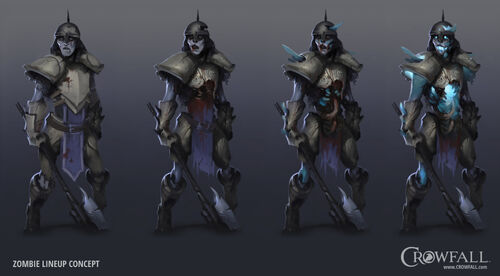 Players can place items, resources, and materials into Embargo – basically, this is a way of “uploading” items to their Account Bank inside a Campaign. This can only be done at certain specific locations inside a Campaign, and items placed there are basically “in quarantine” until the Campaign is over.

When the world is destroyed at the end of a Campaign, some portion of the player’s winnings (i.e. the contents they have placed inside their Embargo vault) will be transferred into that player’s Account Bank. The number of items transferred depends on how well that player fared within the Campaign.

Retrieved from "https://crowfall.fandom.com/wiki/Campaign?oldid=4223"
Community content is available under CC-BY-SA unless otherwise noted.